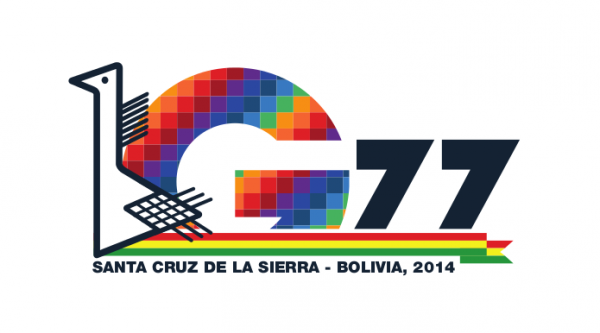 The Summit of the Group of 77 and China, the Declaration of Santa Cruz and export of a paradigm

During the celebration of the first session of the United Nations Conference on Trade and Development (UNCTAD) on June 15, 1964 in the city of Geneva, the Joint Declaration of the Developing Seventy Seven is signed, thus being formed then the G77, as the largest intergovernmental organization of developing countries at the United Nations. The main objective of this organization is to provide the means for the countries of the South to articulate and promote their collective economic interests and enhance its joint negotiating capacity on all major international economic issues within the United Nations system. This organization now has 133 countries in its frown and has moved from the Charter of Algiers product of its first ministerial meeting in 1967 to the Declaration of Santa Cruz, paper prepared for the Summit of the Group of 77 and China, held in the city of Santa Cruz de la Sierra, Bolivia; during the month of June 2014 on the 50th anniversary of the group. On this occasion and since last January 8th president of this organization is in the hands of the Plurinational State of Bolivia, at a ceremony in New York the Republic of Fiji delivery address Mr. Evo Morales.

Strategies for sustainable development, national sovereignty over resources: During the summit a document that would become the Declaration of Santa Cruz, which include the agreements and commitments that came the block during the discussion sessions on different aspects as developed and benefits of these natural resources, eradicating poverty, reducing inequality, sustained and inclusive economic growth, job creation, provision of basic services to our people, access to public health and medicines, agricultural development and food security, sustainable family farming, industrialization and infrastructure, inclusion of women in development, indigenous peoples, SSC, global partnership for development, official development assistance, external debt, reform the global financial architecture, global economic governance, reorientation and strengthening of the United Nations, technology transfer, science and innovation for development, trade, migration, climate change, biodiversity, forests, desertification, land degradation and drought, Internet Governance, including the right to privacy, Millennium Development Goals, Agenda for development after 2015 and the particular needs of developing countries in special situations.

So far this looks like another typical document such international forums, where countries say they agree with everything written and theoretically there somehow agree to comply with gathered in long hours of debate; but those intentions rarely materialize in practice the different country-specific governmental efforts. However, it is interesting to take some of the points contained in this document, as it seem somehow look to introduce elements of what some have called the paradigm under which the current management of the Plurinational State of Bolivia develops as is the Good Life .

The Good Life as fundamental idea of ​​the Constitution of the Bolivian State and the Programme for Economic and Social Development of Bolivia 2009-2013, presents a model of balance with nature and incorporates the principles of ancient indigenous cultures. The Good Life is based on life experiences that prioritize seeking consensus among all, which means that although people have differences when it comes to talk to a neutral point at which all match and not cause conflicts. This paradigm includes in its foundation respect for differences, complementarity of individuals, the defense of identity, prioritization of comedians rights where the rights of Mother Earth are above human rights, deepening the experiences human food, drink, work and communication, social control beyond popular participation, sovereignty and a deep respect for the elderly and women.

Reviewing some of the 242 items that make up the Declaration of Santa Cruz found similarities with the founding principles of the Good Life as civilizational paradigm. These similarities could be taken as a strategy of the Bolivian State to export and gradually introduce its paradigm in the international agenda and more ambitiously in government procedures of the member nations of this body.

This conjecture is a challenge in the interpretation of the international agenda and foreign policy actions of a country like Bolivia, which obviously has a challenging position with current development models and political systems implemented in the last decade in Latin America. This hypothesis questions arise such as: How can a paradigm like this permeate the international agendas of developing countries, Are all developing alternative forms arise out of their condition?

Different ways of progress are not, perhaps the ways as heterogeneous nations block looking for a common goal, can alternative paradigms coexist with traditional forms that it has set the development as an idea in a world where uncertainty, asymmetries and speed of information technology settings do not allow non-instant?

Can the G77 plus China to be consistent with the decisions taken in Santa Cruz and in turn ensure that the different goals in terms of development with each of the participating countries in this block?

Reconfiguration of the world system may not come from the hand of a resolution, but the spontaneous adjustment of a chaotic system desperately looking fit or not pre standards set by those who seek to resemble. The success of a paradigm lies in the weaknesses of the existing exposes Thomas Kuhn, then the prevailing development paradigm is expired and therefore the actors in the world system looking for ways to establish what for them is an alternative exit. If the thought forms can be exported, international forums are the market where you can give these market interactions, under this premise that I used the Bolivia summit to disseminate and to learn in depth about developing your idea in search of recognition and host of the international community an alternative way to achieve the same.