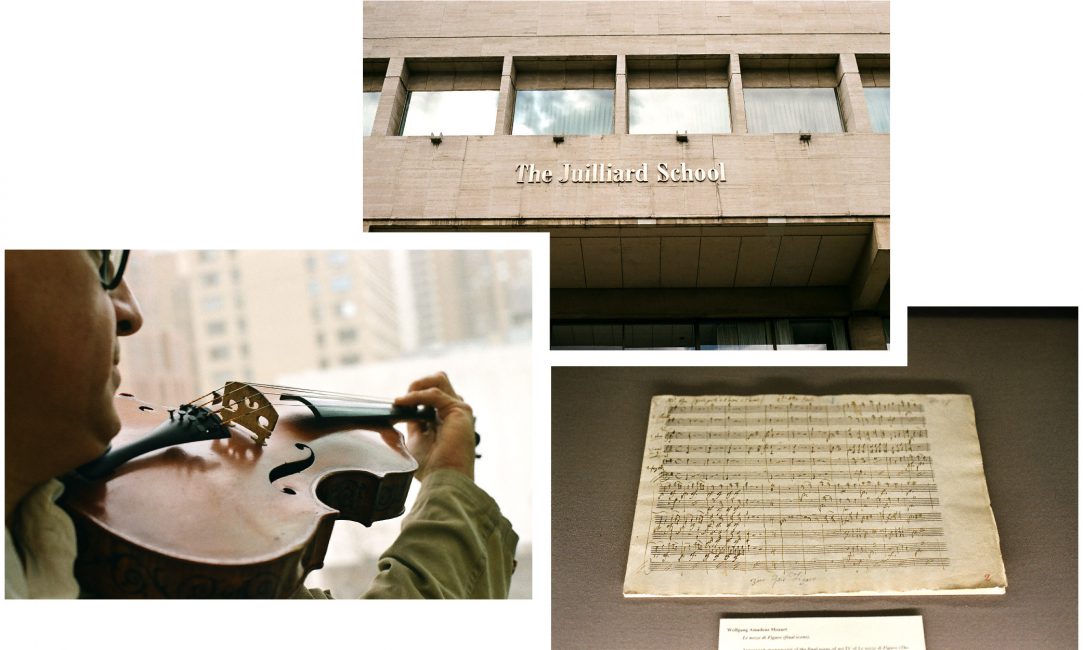 The Juilliard School With Samuel Marchan

Just approach Lincoln Plaza to start breathing culture. In spite of the hustle and bustle of the street flooded with noisy traffic and an incessant movement of people, you perceive in the air the peace of music, singing, performing arts, all manifestations that return to us the joy of living and trust in human beings.

We are heading to one of the most prestigious music schools in the world: The Juilliard School, a mixture of cement and glass construction, imposing, beautiful. We climb the wide staircase and meet young people of all races. Some go with their instrument in tow. In that space music is the great protagonist.

At the top of the stairs Samuel Marchan is waiting for us, who in this school, many years ago, not only trained as a professional but found a house and family. He has in his hands a bicycle helmet covered with a wool mesh that reproduces the flag of Venezuela. «It was woven by a student’s mother,» he explains, following our gaze. In his hands a viola, the instrument that he loves and always accompanies him, and a small violin of paper-mâché, cheerful and colorful.

Years have passed and yet Samuel has not lost his air as an enthusiastic and grateful boy. The same, we imagine, that illuminated his face when he climbed that escalator, for the first time, as a student. A goal so difficult as desired by young people around the world when their dreams fall apart in musical notes.

Samuel knows every corner of The Juilliard, a space that unfolds between infinite corridors. Here he has not only studied but also worked and lived. His story is almost a little fairy tale. It begins in Mérida, a Venezuelan city embedded between green mountains, with cobbled streets and a great cultural ferment. The University of Los Andes has always had national and international teachers of a very high level. There were cultural meetings, book fairs, film festivals. Samuel is born in a family blessed by the gift of music. There are four brothers and they all stand out as a violinist, violist, pianist, singer. For a time the «Marchan Brothers» played together in a quartet that delighted their nationals. In his house there were two great pillars on which his education was based: culture, and in particular music, and solidarity and generosity towards other people.

During the 60s in Mérida, under Maestro Oswaldo Vigas (Universidad de los Andes Cultural Affairs Director) whose vision and connections was able to create the Merida’s School for Ballet and the Music School Sam’s older brothers begin to study music with teachers such as violinists  José Francisco del Castillo. When the elder travels to Caracas and joins the Youth Symphony Orchestra that Maestro Abreu was just beginning, he opens a path for Samuel who will follow him thanks to the help of one of his most beloved and admired teachers: Joen Vásquez. «One day I heard him play the viola and from that moment I knew that was my instrument, that I wanted to learn to play like him.» Vasquez had returned to Venezuela after studying at Juilliard. Under his protective wing, young Samuel learns, improves his style and earns an audition to play with the Caracas Municipal Symphony Orchestra.

Memories are bubbling. Names, places, details are intertwined as we walk through the halls of a school that is a temple of excellence. From small rooms we get wisps of music extracted from diverse instruments in a concert of disparate notes and yet full of harmony. Young people of all ages, oblivious to what is going on around them, are focused on their essays. Occasionally a group of students, which swarm of bees, surrounds a teacher and is lost in one of the classrooms.

“I arrived here – Samuel says – thanks to the generosity of Professor Margaret Pardee. She was my teacher in some summer courses in Venezuela and, during a trip to New York with my brothers, I asked her to give me some classes. She encouraged me to participate in an audition to enter Juilliard. She was a great patron, she helped many Venezuelans, she even hosted us at her house.”

Samuel won the scholarship to study but, after the first moment of euphoria, he understood that, although his studies were paid, he had no money to stay. He needed a job. And he found it in the maintenance and cleaning department of Juilliard itself. “I learned to paint, fix doors, clean. I went with a paint-stained flannel and a cart with various work tools. At the bottom, almost hidden, was my viola. No one, when crossing with me, imagined that I was a student ”. American Ballet Company moving out of Juiliard freed the Dance Company Dressing rooms and he was temporary able to use them as his emotional shelter, where Juilliard janitors were his family. «I never lacked food because everyone shared with me what they had.»

We enter very spacious rooms, cozy, modern spaces, equipped for shows and concerts. «Here I found God and the devil,» Samuel Marchan continues as he closes a door, letting himself be carried away by memories.

After graduating from Juilliard, he completed a master’s degree in NYU and in parallel a course to learn the Suzuki method. «It was a great luck because knowing the Suzuki method has allowed me to devote myself to teaching.»

If music is the great passion of Samuel Marchan we can say, without a doubt, that teaching is another passion as strong as the first. In the more than twenty years since he left the classroom as a student, he has turned to teaching with overwhelming enthusiasm. There is no neighborhood in New York where he has not taught music in any of its schools. He goes on his bike from one side of the city to the other, without pause, from Monday to Monday, without ever losing interest and much less good humor. He has replicated the model of Venezuelan children’s and youth orchestras in New York and New Jersey. Among his most beautiful projects is the «Paper Orchestra» aimed at children. With boxes and cardboard cups, together with children and parents, he creates beautiful replica violins. Sticks act as a bow. “The idea is to work with three-year-old children who are not kinesthetically and psychologically prepared to work with a real instrument. Thanks to these replica violins, which we build together, they can learn fundamentals of posture. Furthermore, the most important thing is that the child, almost without realizing it, understands that sound and music do not come from the instrument but from oneself. They know, from childhood, that when you play an instrument you are generating a memory, you are looking for your voice. ”

Samuel works with children of different nationalities, age, and social status and his  commitment is always the same. “We are a family, a team, we share sorrows and glories, tears and laughter. It is a walk together on a road with stones, with troughs, with droughts, with intense heat and with cold”. Speaking of the children he finds in the Santa Teresa parish that Father Alexis officiates, a priest of great mental openness and tireless promoter of culture, says: “There are children who are children of families of  immigrants. This space dedicated to music is particularly important for them. It allows them to forget anxieties and fears, reinforces their self-esteem and makes them feel less alone.” When talking about special children, he adds that music can also be a great help for them. “I am dyslexic myself and suffer from attention deficit disorder. Viola has served me as therapy and as a refuge. Children learn to look for music within themselves, whatever their problem, and that always helps them. ”

Music, the ability to pursue dreams with dedication and determination are values ​​that encourage the entire Marchan family. Wife and son are about to graduate, she at the Fashion Institute of Technology and he in Political Science. The youngest daughter, in addition to studying, collaborates with the father in his musical teaching projects, especially with the youngest ones, plays violin and sings. “Music is a vital part of our house. We listen to everything, without restrictions. ”

Samuel Marchan is  also developing a personal project as a violist. “Bach wrote a series of concerts for violin, but he also recycled them and adapted them to other instruments. In this case to nail it in a shade that is very friendly to the viola. I transcribed them and I will publish them. I already made a first premiere with one of them and I want to do a concert with everyone in a chamber orchestra. This is my baby».

– If you had to leave New York, what would you take with you?

– I owe my professional development to New York. Here I learned to invent and reinvent myself. I knew, since I arrived, that I couldn’t crash into a wall. I had to find a way to break it. In this city I did things that I never thought I was going to do and I built my name with work. They appreciate me for being what I am, for what I do and not for being someone’s son or friend. That capacity for resistance, that air of innovation, that enthusiasm to always do something new is what I would take with me if one day I had to leave this city.