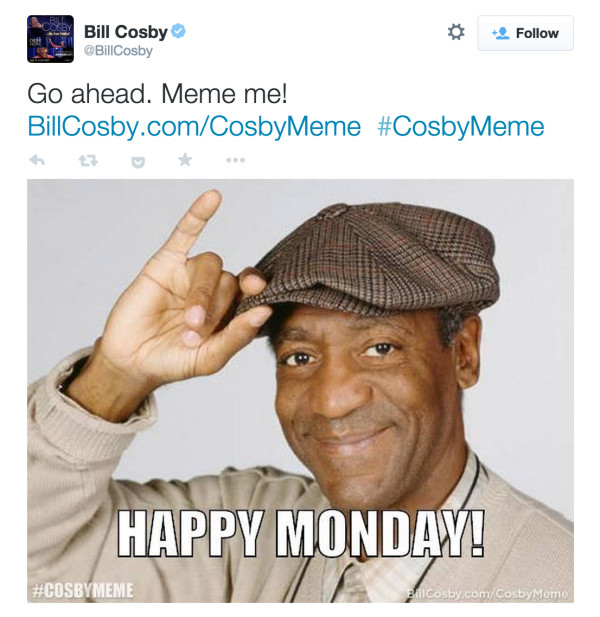 Sexual assault in times of Internet

On October 16th, the comedian Hannibal Buress directly attacked Cosby on his comedy special and the bit quickly became viral, because the Internet. Cosby’s PR team decides that the BEST idea to quickly battle the unwanted bad press was to encourage the comedian’s Twitter followers to make memes of him.

Bill Cosby has 3.96 million followers on Twitter. The results were dismal to say the least. Tragic. Preposterous. Cosby tried to be friendly with the Internet and it chewed him up and spit him out.

He should have his entire PR team executed.

It wasn’t enough to deal with the Internet. Women who had previously accused Cosby of rape came forth with their stories once again, and new victims came into the picture, most notably famous supermodel and America’s Next Top Model judge, Janice Dickinson. There have been 16 women to date.

What does this do?

The snowball effect of this is spiraling out of control and Cosby’s career has taken a hit. Talk show appearances have been canceled. The launches of a brand new comedy special by Netflix and a sitcom project from NBC have also been canceled. Venues don’t want anything to do with Bill Cosby.

I don’t know if the man did it or not, but it is very suspicious that all claims have similar modus operandi, and it doesn’t matter how much of a Cosby Show fan you were (as I was). This is just a little too shady to ignore anymore. The real question here is: will this just be part of the news cycle or will this actually escalate beyond the news and the Internet? We’ll have to wait and see.