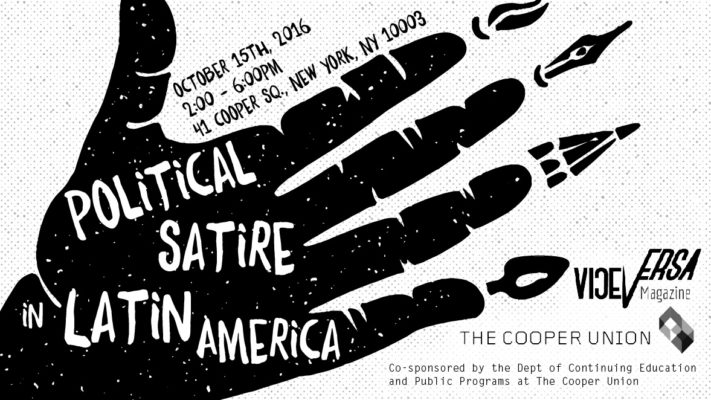 Bitter Laughter: Political Satire and Freedom of Speech in Latin America and the Caribbean

NEW YORK: ViceVersa Magazine presents the conference «Bitter Laughter: Political Satire and Freedom of Speech in Latin America and the Caribbean», co-sponsored by the Department of Continuing Education and Public Programs at The Cooper Union, on October 15th, 2016, from 2:00pm to 6:00pm.

International cartoonists and political experts will analyze the situation of freedom of speech in the region, from the standpoint of political satire. Bonil (Xavier Bonilla) from Ecuador, Feggo (Felipe Galindo) from Mexico, Rayma (Rayma Suprani) and Juan Andrés Ravell from Venezuela, and Chócolo (Harold Trujillo Torres) from Colombia, will share their insights with writer and humorist Enrisco (Enrique del Risco) from Cuba, as well as with Elisa Tótaro, political communications expert from Venezuela.

Being a journalist and a graphic reporter in Latin America and the Caribbean implies to be often forced to live under constant threat. Political persecution and organized crime make journalists’ work increasingly difficult, and in many cases, entails a death sentence.

A recent study by the US organization Freedom House denounces the sharp deterioration of the working and living conditions of journalists, showing a particular undermining of free speech in the region.

Satire is one of the most feared genres by politicians as it has the ability to reach all audiences. The effect of an image is immediate and worth a thousand words. Bolstered with laughter, the image becomes a powerful vehicle to form an instant connection with citizens’ feelings.

ViceVersa Magazine is an online digital magazine founded in New York in 2014, with the objective of portraying the talent and positive contribution of Hispanics in the United States in every field. Every week, ViceVersa Magazine publishes a diverse and high-quality content in Spanish, together with an agenda of cultural, international and economic events, for Hispanics in New York. The variety of collaborators demonstrates the regional prowess; all and each one of them, with their words and images, are the reflection of a talented, attentive and analytical population. ViceVersa Magazine is a crucible of different voices, and, thanks to these voices, we have become a platform for collective thinking.

The Cooper Union is the ideal space for the discussion of a crucial issue such as the freedom of speech in Latin America and the Caribbean. Founded in 1859 by Peter Cooper, is a bastion of free speech, and a platform for the promotion of social and civil rights in the United States.

“Bitter Laughter: Political Satire and Freedom of Speech in Latin America and the Caribbean”, will take place at Frederick P. Rose Auditorium at The Cooper Union in New York, on Saturday, October 15th, 2016, from 2:00pm to 6:00pm.