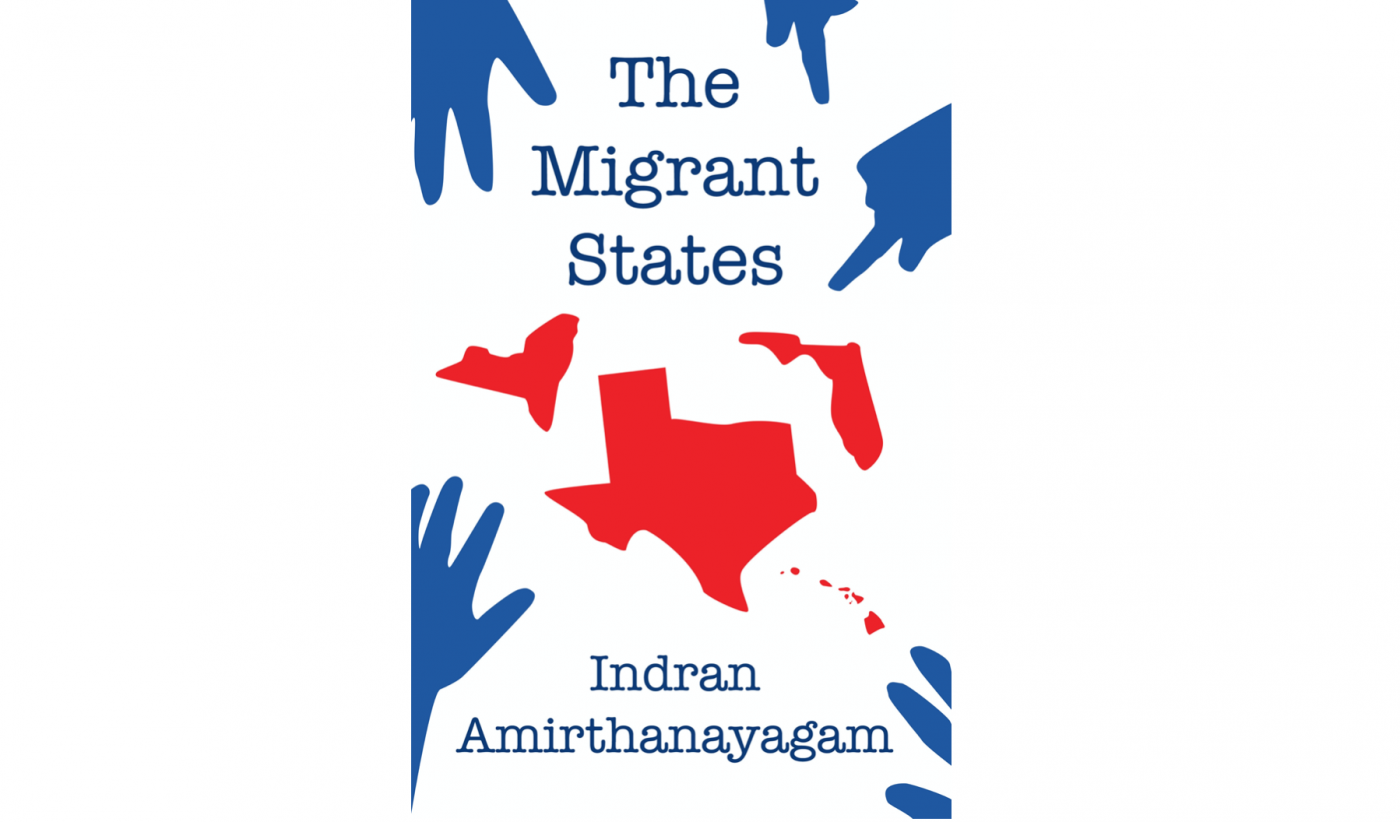 Indran Amirthanayagam is a prolific poet, migrating constantly from one language to another; as I write this review about his last poetry book in English, The Migrant States (Hanging Loose Press, Brooklyn, New York, 2020), another book has just come out in French, Sur l’île nostalgique (L’Harmattan, 2020), in which his love for Haiti is a recurrent theme.

The poetry of The Migrant States follows the aesthetic path the poet charts in his previously published books. In other words, The Migrant States is the map — and le territoire — of the meaning of poetry for the poet: a get-together to discover and to create a fraternity in all languages, a life conduit that connects new lands, new islands where writers and daily life are reconnaissance objects for this great traveler-poet.

Before the first section, the book includes two preliminary poems, two ars poetica, that generate a dialectic. These poems introduce the reader to the world or island of the poetic voice. “Mind Breathing” features different motifs in Indran’s poetry, the relevance of reading, the presence of a major figure in local or global literature, an historical moment in the biography of the author, a thought on poetry itself and the mundane details of life:

On November 17, 1960 I breathed for the first time without
maternal assistance, on a cot, at Macarthy Nursing Home,
a few blocks from our residence in Colombo.

Allen brought a harmonium as a carry-on music box
on his flight to Oahu. Back then nobody examined
strings for chemical traces, death marches, laments. (1)

In “This Is No Time for Criticism”, the other ars poetica, the poetic subject assesses the quality of his verses, reviews the historical events of 2019 as well as how his voice generates a synergy with that particular history of the world. His aim: to validate the poetic tone of his verses. The poet creates a différance with other voices with whom he dwells in the Gutenberg Galaxy:

I realize my lines are not lyrical. They have no surprising leaps,
or rhythmic epiphanies. They are flat, a body shot on the street
visited by paramedics, wailing young men and women. We do
not discriminate in 2019. We are witnessing birth of a revolt,
a rejection, and you say my verse is agitprop, an unfit exercise
for poetry. I reply writing, that the body must be buried with dignity, (2)

After the ars poetica, the book continues with For Walt. What do Whitman and Amirthanayagam have in common? Well, an island as a matrix, a poetry that drifts apart from hermeticism, a poetry that becomes activism and national ethos — Leaves of Grass and The Migrant States mirror each other trespassing centuries of distance as books and poetics that pose a grand national narrative. That is the feeling that communicates “Stop by”: “I am in your debt, Walt, and to all the poets who gave birth to you and to those / you have sired in turn. Thank you. The word is good and in our hands now” (5). Their birth on an island is the port of departure for the life journey of these two poets. In this regard, in “After Midnight” the poetic voice states: “Walter Whitman will come out of his mother’s ninth month midnight / tomorrow, the 31st of May, in the family room, at the Walter Whitman / home in West Hills, Huntington, Long Island, to be known henceforth / in all poetry as Paumanok, the birth island of the poet […]” (5).

The journey through The Migrant States continues with the section Curtain Call that — according to the themes of the different poems — becomes a coming-of-age of verses that encompasses a period of aesthetic education of the voice of the poems. This voice flows in his continuous migrations from one language to another, from one country to another, looking for his own voice, his own island-nation of poets and poetry. To this effect, the poetic voice unveils in the poem “Curtain Call”:

When you please, make the reader laugh, lighten
the baggage he carries around home, street and
office, you reach the first level of enlightenment,
then you pause, consulting the poets along
the way. Yeats wrote what then, Cavafy offered

that you cannot escape the city in which
you were born, Nazim dreamed of a straw blonde,
a night train across Europe, poplars falling
in the Turkey from which he remained in exile.
Exile is the modern condition, Ceylon felled (22)

Next, the reader arrives at the section La Voix du Port, where Haiti is the main character of this migrant journey of verses and affections. Indran is fond of Haiti. His native Ceylon and Haiti share many things in common: a colonial past, a complex present, and at the same time a vivid sense of culture, typical of the inhabitants of an island. In this respect, the poetic voice explores these experiences in the poem “We Are Spirit. We Are King.”:

You cannot deny my identity.
I am there even if I am not there.
I am in your head, in the memory
of the country. Even if you have
never met me I am there because
my Sri Lankan brothers
served on the island
as UN Peacekeepers. You know
the whole world came to Haiti
to save us from the gangs?
The island is very important,
a responsibility of foreign countries.
Once, we produced profits
greater than the 13 British
colonies in America. (33)

Then, the reader — as a traveler of signs — arrives at the central section that gives the book its title, The Migrant States. Here, the poetic voice explores the complexities of being an American, the lost fatherland: Ceylon is a recurring theme, so is South America. Lima, the Peruvian rainforest, and Colombia are mentioned. As I stressed before, being an American connotes — for the poetic subject of the poems — to identify oneself with the whole of America from Canada to Tierra del Fuego, to be a little bit Haitian, a little bit Tamil, a little bit Peruvian, a little bit from New Jersey: being an American, finally, is to carry all the world within oneself. In the poem “Lima, January”, the poetic voice achieves the genuine portrayal of the ambience of a space called Lima, during a hot summer day in January. That space called “Lima” could evoke a neighborhood back in New Jersey that the speaker hasn’t explored yet. This feeling is coupled with the concept of the world as a house. Such is the value of these verses: they bring us closer to these mobile territories of love and soul — these cities that inhabit in our migrant and worlderer heart:

It is summer here,
hot for the moment,
plantain tree bearing fruit
in the garden, passion and
mango in the shops, a lot
of fish, the country blessed
by the Humboldt Current
which brings cold water
from the Antarctic and
plentiful anchovies with it
to feed up the food chain (63)

Departures is the section that announces that the journey is almost over. It’s the space chosen to pay poetic tribute to the ones who have left us, including the figure of the father of the poet. In this section, the poetic voice shares his experiences migrating from one country to another, from one city to another. The poetic voice devours territories with his sight, with his writing, with his singing, with the word. The Migrant States is a poetic city, it is a Borgian Aleph of all times, of all anecdotes, of all knowledge. There we look in amazement at our own features. The verses of the poem “Summer, Chess (for Anandan)” articulate with simplicity and virtuosity the experience of inhabiting loss and departures. The poetic voice has found a home in this constant reproduction of meaning of the everyday word:

You go now and I am sad,
and the sadness will spill
into late summer
and autumn until we meet
again when the leaves
fall and chestnuts
smack our memories (77)

The reading of the book — a journey within — ends with the third section entitled For Walt. In the beginning was Walt, at the end is Walt still. This time, the last tribute as a ritual allows the voice to leave the island as a literary motif. The island has become a metaphor of the wonderful world of the poetic imagination which the voice inhabits. Its name is Paumanok —modern-day Long Island — and also Ceylon but never Sri Lanka. Therefore, the verses of “Gone from Paumanok” feed from the poetic tradition that inspires the poetic voice of the poems of The Migrant States. These words and the simple life — a familiar aesthetic that is at the same time, rebellious, deeply critical — are filled with humanity and an islander sense of belonging:

I feel I must end with a bang, at least a shake and a whistle,
a riff, a taste, a dance on a dime. I want to end because
suites must finish, poems arrive at the punch line, the final
full stop. I am not sure if I can go on like the sea, ridden
with plastics, with patches dead even to oxygen. I am not
sure I can whirl in space like a meteor, an asteroid
or some rubbish from a failed satellite. I am not after all
a celestial body, or a golden sunflower, just a fifty-eight-
year old man a few hundred miles from Paumanok
and stopped—owing to family ties, to work and the need
to build a house, high enough to avoid the rain when it floods. (82)

The Migrant States suggests a new covenant: to leave behind the simulation of the melting pot that never was generous upon the encounter and the reflection in the Otherness and the multiple languages and traditions of the United States of America. The Migrant States proposes exactly the opposite: the singing, the constant migration and movement, that incorporates multiple languages, traditions, authors, objects; avoiding assimilation and celebrating the blessed and needed différance of each one. For this reason, I consider imperative the reading of The Migrant States in the high school and university system of the United States of America, so a new generation of Americans may study and ponder deeply the great significance of migration as a condition and experience of life, essential for the existence and survival of the human race, for thousands of years and through the present day.