Katherine Vargas: No Typical Day in the White House – Interview

WASHINGTON: In an unmistakable accent from her native Bogotá, Katherine Vargas shares what it is like to have one of the newest positions in the White House.

Vargas is the Director of Hispanic Media for Barak Obama, a role that originated under President Obama in an effort to increase focus on the growing Latin population of the United States. With the poise of an experienced spokeswoman, undeniably acquired during her frequent guest appearances in Univision, Telemundo and CNN en Español, Vargas says that it was difficult for her family to decide to emigrate. Today, with appreciation, she stresses the advantage of arriving in Boca Raton, Florida, when she was only 14 years old, as it allowed her to quickly adjust to American culture. But she also makes it very clear that her assimilation has not eclipsed her Latin identity.

Vargas never implies that she was an overnight success. Rather, her words express an optimistic and practical attitude, embracing the American maxim that hard work and dedication lend to big opportunities. After graduating from Florida International University with a bachelor’s in international relations, Vargas felt the pull to be in the epicenter of politics and moved to Washington, D.C. There she worked for the National Immigration Law Center and the National Forum of Immigration, as its director of communication, devoting long hours to people she passionately cares about: Latinos in the United States.

Vargas’s achievements are impressive on their own, but considering it was all accomplished in her thirties is striking. In fact, in 2013,  National Forum Magazine named her one of “25 Most Influential Washington Women under 35.” Hispanic Business Magazine also highlighted her endeavors, listing her as one of the “50 Most Influential Hispanics.” As she recently tweeted, “‘Dreamers’ is more than just a title, it is an accurate description of America.” In an exclusive interview with ViceVersa, Vargas tells us about how her dreams have hit the ground running. 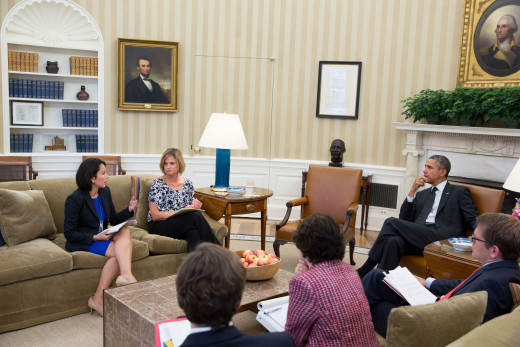 What is your role as the Director of Hispanic Media at the White House?

I’m the second person to ever hold this position, after Luis Miranda. It’s the first time [under President Obama] that the Executive Office of the President officially has a person devoted 100%, full time, to Hispanic media outreach. My role consists of communicating the impact of the President’s agenda to Hispanic media, like for example healthcare topics, access to insurance through Obamacare, efforts to provide better access to education and the President’s commitment with immigration topics.

Today, [September 19] for instance, we started a new campaign to prevent sexual violence in universities. I participated highlighting the stories of Hispanic students. The campaign is extremely important for this community.

¿How would you describe your move from Colombia to the United States?

I left Colombia in the nineties. My parents moved to southern Florida in search of a better future. I arrived here as a teenager, I learned a lot, and adapted well to the culture. I feel very Colombian, but also very American. I can switch from one world to the other quite easily. It was a benefit to move here when I was young.

I studied international relations with a concentration in Latin America, and topics related to immigration always interested me. I eventually moved from Florida to Washington to be in the epicenter of politics and have now worked on immigration rights issues for nearly a decade.

A day in the White House…

There’s no typical day. We respond to unexpected crises and situations all the time. For example, the Department of Education announces a new policy and we have to plan how to communicate it or how to highlight in Hispanic media the impact of Obama’s environmental policies on the Latin American community.

What would you say is your job’s biggest challenge?

The biggest challenge is to ensure that the media cover more than immigration, which is crucial to Hispanics, but there are also other topics that should be getting attention. For instance, topics related to the economy and the efforts to increase minimum wageare extremely important for the Latin community, so is the impact of climate change, but the focus is at times too concentrated on immigration. Or, for example, there are also topics like national security and the President’s strategy to fight terrorism.

National security and terrorism in what sense?

Well, topics of national security also involve Hispanics living in the United States. We also have Hispanics fighting in the armed forces, fighting shoulder to shoulder.

There are only two other people: my supervisor and a press assistant, who forms part of the larger Obama communications team.

Good sense of humor is key for surviving the day. We support each other and Hispanic staffers have a special camaraderie because we are constantly thinking about ways to include the interests of the Hispanic community in political decisions. Cecilia Muñoz, currently the White House’s highest-ranking Latina as Director of the White House Domestic Policy Council, is an advisor to all of us Hispanics in the Office. She is like a mother to all of us and offers tremendous support.

What did you think of President Obama the first time you met him?

[Laughs] It was surprising… well… how accessible he is. And how simple. He has a great sense of humor. [Laughs] It’s incredible that a person with his role can be that simple.

Have you had opportunities to work with the First Lady, Michelle Obama?

The First Lady has her own communications office, led by another Hispanic woman, Maria Cristina González, but I have had the opportunity to work with her on some occasions. For example, during the Obamacare campaign, the First Lady interviewed Latin DJs to inform young Hispanics about the importance of enrolling in health insurance. Her interview was quite pleasant. She is very charismatic. While exchanging with Hispanic women, the First Lady said that they should keep in mind that when they go out to dance, in their high heels, [laughs] they must be aware that if with a wrong move they fall, they will need insurance.

What advice would you give to people from Latin America who would like to grow professionally in Washington?

Hispanics do not realize how valuable it is to be bilingual. My advice would be to sell this skill. As we [Hispanics] continue to thrive in the United States, it’s right to be proud of who we are and that we know how to value and sell our multicultural skills in the professional field. 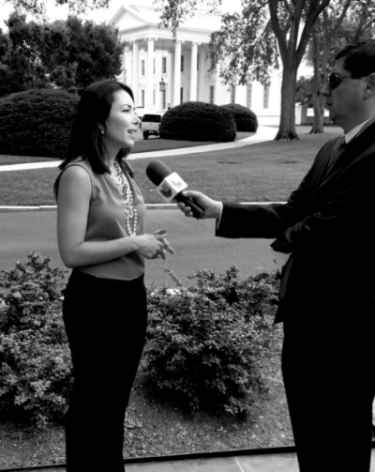 In a few words…

Book you are reading now: A lot of news [laughs].

Success, in one word: Dedication.

If you didn’t do what you do now: It would have to be related to communicating for the Hispanic community.

What most surprises you about working in the White House: Witnessing history in the making.

Morning ritual: Visualize the day ahead (affirmations, like in yoga).

Role model: My mom. Thanks to her I’m in the United States. It was her idea to move and leave behind her home, her country, her traditions… immigration will go on and yes, it enriches this country [United States], but it is hard and you have to be very brave for a vision of a better future.

And, it’s imperative to know: best coffee in DC: [Without doubting it for a second] The “campesino” coffee at Juan Valdez. I have already recruited several of my American colleagues, it’s only a few blocks from the White House.