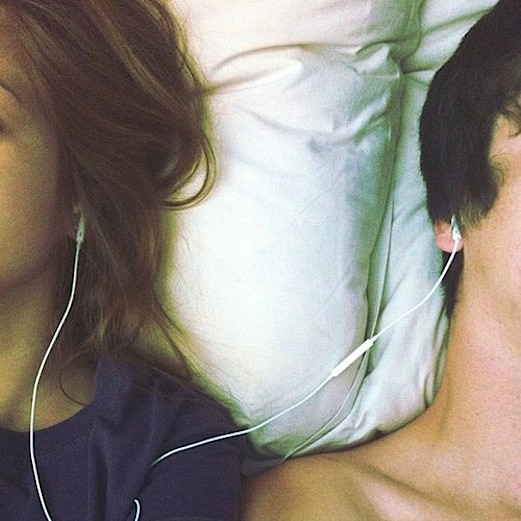 You had me at your iPod

In Nick and Norah’s Infinite Playlist, Norah calls Nick her musical soulmate because they have the same tastes in music (except for all that The Cure), and of course the quest to find Where’s Fluffy ends with a joyful surprise.

Now, what is it about music that makes people so interconnected with each other? Why does a specific band decide if we’re going to be friends or not? Why if someone shared a band with you it always comes back to that person whenever you listen to it? Why does music define the way we act? I remember that I couldn’t listen to any song on my iPod for three weeks after a breakup because we had all the same tastes in music. His music was mine and I couldn’t handle it.

But… it’s nice to have something that takes you back to a moment where you were out of this world exploding with joy because there’s no place you’d rather be when you listen to Frank Sinatra or Pharrell Williams’ Happy; it can be to feel just plain happy because your iPod put that song you and your best friend always sing when you’re in his car, or laugh out loud when Tal Bachman’s “She’s So High” because you have the happiest memory of your little sister and you singing it at the top of your lungs in your underwear.

Music makes memories that more meaningful. Music can precede your memories. You can have a song in your head for a specific moment and when it comes and you put the song it’s even more perfect than you imagined. My friends and I used to play a game every time we were stuck in traffic that was to put the iPod on shuffle and make a movie scene with the song. The results? Phil Collins should be in every movie.

But there is something within music that is even more personal than music itself. Playlists. I think playlists are a little piece of somebody’s mind. I learned that about four years ago when one of my best friends and I started giving mix CD’s as birthday presents. How do you choose which songs to share with another person? What is the power of a perfect playlist to put you in a better mood or to transport you anywhere? It doesn’t matter whether it has Kanye or Milky Chance. Playlists have superpowers and have to be handled with care. With great power comes great responsibility.

There are people that won’t get it and you can’t explain it. Why should I devote my time to explain the entire story of why The Fray reminds me of high school? Why does the Frozen soundtrack means studying about ethnic conflict? Why is there a Bob Schneider song that I can’t listen to? Music is such an active part of our lives that if we decided to do a timeline of our lives with artists or songs, it would match perfectly. It could tell you that I discovered The Beatles in 8th grade and my life changed forever. It also defined that people who don’t like The Beatles aren’t worthy of my time because they have mental problems.

Nick and Norah define perfectly what music does to people (and the movie has an amazing soundtrack, obviously) but the most perfect part about music is this:

Thom: You just haven’t figured it out yet, have you.

Nick: I guess not.

Nick: What about them?

Thom: Look, other bands, they want to make it about sex or pain, but you know, The Beatles, they had it all figured out, okay? «I Want to Hold Your Hand.» The first single. It’s effing brilliant, right?… That’s what everybody wants, Nicky. They don’t want a twenty-four-hour hump sesh, they don’t want to be married to you for a hundred years. They just want to hold your hand.