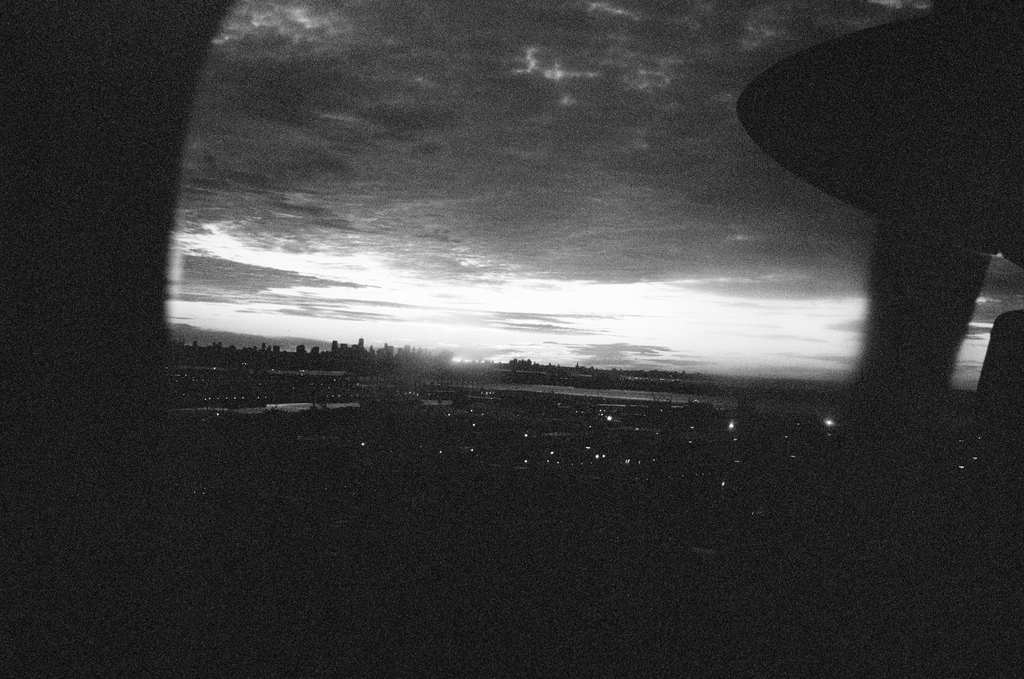 My destination was Vermont. But there was an unavoidable stopover in Newark, one of New York’s airports. During an infinity of nights I thought about the city’s black and white silhouette. On cold, cloudy days I imagined the paths, the indelible streets, the syncopated notes of jazz concerts. For weeks I recalled two impossible scenes in Manhattan, Woody Allen’s movie that begins with an unruly, off-screen voice that admits to having a devotion to New York City. The shining and devoted expectation crashed when we landed in Newark. The airport was a mere ghost of steel and metal, an anonymous, swollen shadow.

My stay in Newark did not escape the dictates of boring visits to airports. It was several hours before the airplane took off for Burlington, capital of the state of Vermont.

The night before the flight to USA, Luis Chitarroni revealed to me that it was in Vermont that Hitchcock filmed The Trouble with Harry, a film that narrates, with unequaled humor, an investigation that follows the appearance of a cadaver that resists resting in a tomb without the murderer’s name. Chitarroni not only told me this, but he also added: Since Hitchcock arrived to film in the wrong season, he asked for the trees to be painted, to accord with the original film project. And so, already, asking nothing in return, Vermont was offering me happiness: thinking about the painted trees of the Mozart of film.

When the plane took off from Newark, I recovered paradise lost. From the air, and beneath the luminous color of a protector sky, I was able to see the meanderings of an unusual map: New York was a tree of dark water, with innumerable liquid and cement branches. Once the small plane’s wheels were raised, I saw, with an uncertain and incomparable magnifying glass, the bridges and paths of water. From the diaphanous air, the city was a labyrinth where the lowest and green center was the Statue of Liberty.

Upon arrival in the solitary and tranquil city, I met Nicholas Durrell, an affable taxi driver with a hidden passion. I didn’t know Nicholas, and much less did I expect him to be an elegant citizen of the British Empire who had watched Carlos Saura’s film in a hidden movie theatre in a lost city. No sooner did I rest my tired body on the seat of his taxi than he spoke to me of the goodness of the “tiango” and the difficult dance steps. Then he mentioned that he knew Swedish and, smiling, he uttered a curious phrase in the harsh Nordic language—unrecognizable.

Nicholas was cheerful and slow to speak, so I was able to follow his phrases unfolding in an English that was clean and nuanced. With the high sun in his face, he spoke about the North American soil as if he were Thoreau in the 19th century; he praised the green places in the rural world, and he recalled his English past as if it were the sole antecedent to the present glory. He glanced out the window again and again in order to contemplate the partial and romantic “vistas” of the splendid lake and he praised the slow life among the peaceable mountains in the open country.

But what caught my attention was not his arduous apology of the countryside. What surprised me was that I found myself outside the country on July 9, and that I was on a solitary route in the taxi of Nicholas Durrell, a proud British citizen.

On the road, Nicholas descended from the automobile and bought a packet of snacks. During that existential interval, I thought about Argentine independence, about the ignorance of the people on that particular, and about the agitated discussions at home in Tucuman. Nicholas returned to the car and offered me the salty potato chips. I did not accept.

Tired of the monotonous color of the asphalt, I inquired as to his reading. Devoured by a passion, Nicholas detailed his likes in matters of art, and recommended that I visit the museum in Shelburne, a city with an English name, where he lived and which, of course, reminded him of his ancient heritage. At that moment, he did not want to, or could not, speak about his reading.

When we stopped at a supermarket for me to do some shopping, I noticed, out of the corner of my eye, that next to the gear shift Nicholas had a book in English titled Train Station. A Social History. I needed only to ask about the title, for him to open up about his love of trains and the captivating stories hidden in the railways and tracks. He talked about the connections between Ana Karenina and strolls in the Russian snow, about Emile Zola, about the Hitchcock films, Strangers on a Train and International Intrigue (once again, the ghost of an Englishman appeared), and about some contemporary novels that evoke lingering tragedies on steel wheels.

Toward the end of the afternoon, when the sun laid its tired rays on the enormous, silent Middlebury trees, Nicholas let loose the phrase: “Peron’s Argentina has a lot to do with trains.” I thought about the English trains, but said nothing: I let him continue, as if his oral writing were less important than what my memory was assembling in secret. While Nicholas evoked the noble matter of these machines during Peron’s government, I thought: Does Nicholas know that today is July 9? Does he know that this month the English trains in his mouth are a faraway shadow of a dejected independence being celebrated today in a faraway country in the Southern Cone?