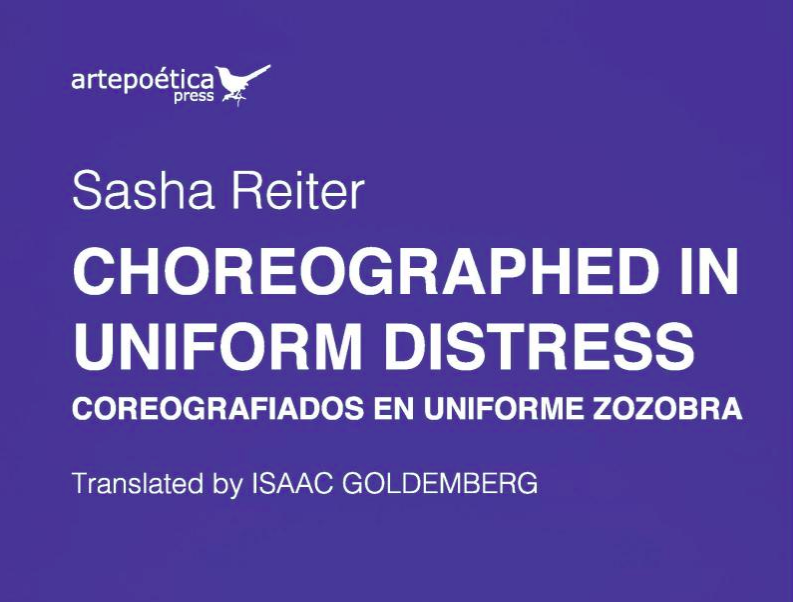 Sasha Reiter debuts with this bilingual poetry collection (English-Spanish) published by Artepoética Press, based in New York City. In her introduction Cuban-American poet Carlota Caulfield, professor of Creative Writing at Mills College, affirms that “Sasha Reiter’s Choreographed in Uniform Distress introduces a young writer of stunning linguistic energy and maturity. What is outstanding in this collection is the clarity of its imagery and its musicality. Expertly translated into Spanish by Isaac Goldemberg, these poems document paths of discovery in both observation and language. Reiter’s voice is attentive, open and sensuous. Whether talking about dreams and memory, everyday experiences or a cellphone obsession, the poet offers us skillful and poignant images. I delight in the poems where elements of our modern world float, sometimes gently and others fast-paced, weaving not only personal, but also others’ experiences into stories. Choreographed in Uniform Distress is a remarkable debut collection. Reiter’s poems merit a wide audience.”

According to the Argentinian writer Luis Benítez, “The quality of Sasha Reiter’s  words, the exact combination of them, the play of reverberations, the alternations and modifications of meaning that are produced among the chosen words demonstrate that Sasha Reiter is an authentic poet indeed. His work is extremely important. His texts dialogue and interact among themselves and then with their reader, like a polyphony that opens up the nuances and hidden places, the tonalities and landscapes of a universe that belongs to Reiter. He is a builder of meanings that, taken together, form a multifaceted interrogative, questioning the condition of modern man. This is the auspicious beginning for what will be a very successful career as a poet.”

American poet Daniel Shapiro, Distinguished Lecturer at The City University of New York, and Editor of Review: Literature and Arts of the Americas, states that “Sasha Reiter’s poems display authority and a sureness in pacing and construction as they meander through the idiosyncrasies of daily life.  A promising young voice.”

Sasha Reiter was born in New York City in 1996. He grew up in the Bronx, where as the son of an Argentinian father and a Peruvian mother, he experienced firsthand the metaphorical otherness of being both Latino and Jew- ish. He attended Public School and received his B.A. in English Literature and Creative Writing from Binghamton University. He intends to pursue a Masters in English with a specialization in Creative Writing.

Choreographed in Uniform Distress is available at: https://amzn.to/2JJytOU