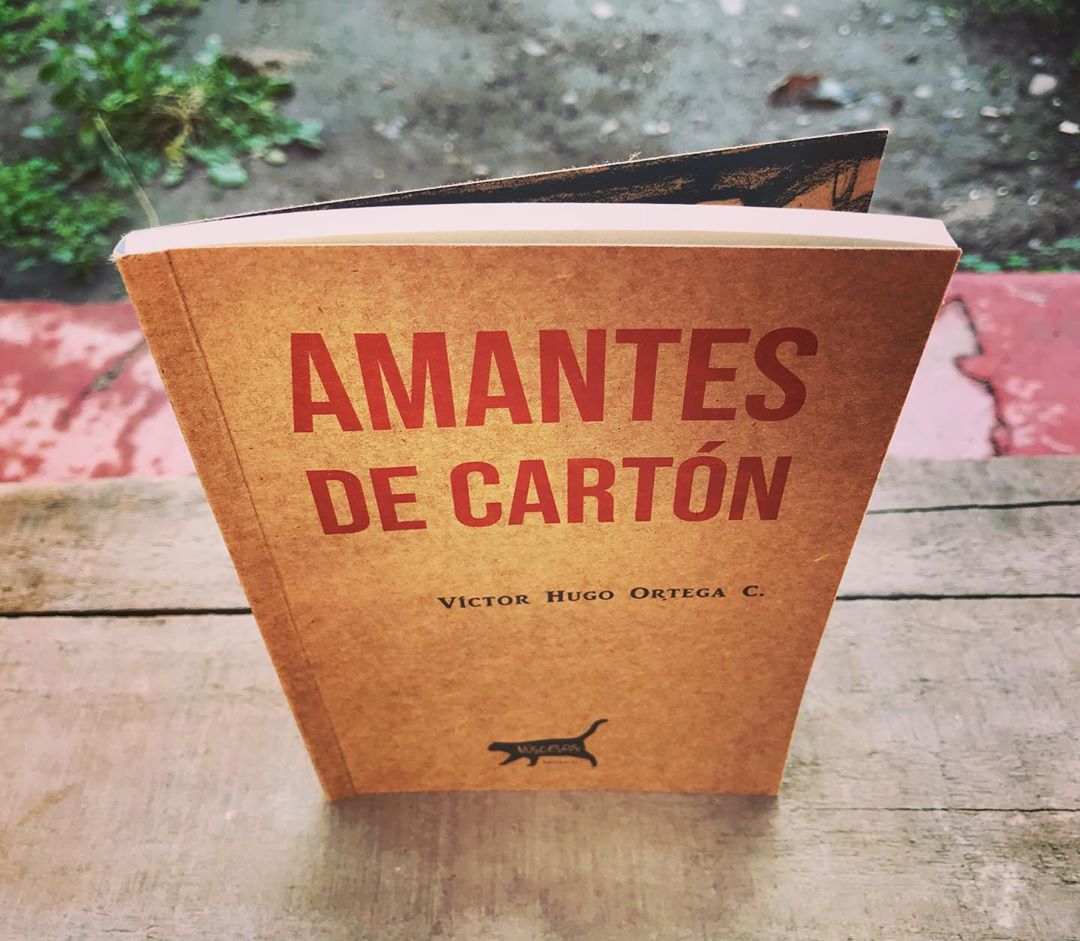 Víctor Hugo Ortega examines the relationship between romantic and political disillusionment in Amantes de cartón (Cardboard lovers), published by Vísceras Editorial in 2019, in a poetry collection that is almost prophetic in its exploration of the atmosphere before the estallido social in Chile, a series of protests that began in autumn 2019. It’s a profoundly Chilean work in its concerns and interests, and it’s worth highlighting Chile’s recent history to understand the context the collection was produced in. Written in early 2019, this year will surely leave its mark on Chilean history, due to the social uprising that took place at the end of the year. While it began with a protest against the rising cost of the Santiago metro, it became an unprecedented social movement that continues to affect Chileans today.

The poet wrote the collection before the social movement – and before the pandemic too – so at first glance, perhaps we only notice three protagonists in the collection: the poet, his lover, and the city of Santiago. But behind it all, there lies a fourth protagonist – the spectre of the future social uprising in Chile which continues to engulf the country still, an uprising which continues to evolve and transform into new phantoms, in new political crises.

The looming spectre of this political earthquake, this chronicle of a death foretold – but of a country – is present throughout the collection. While the title may suggest a singularly personal work, the intrusion of the political is apparent from the very first poem, ‘El ojo de Santiago’ (The Eye of Santiago), where an eye looks impersonally at the lovers, in this contaminated atmosphere. You already notice the presence of the language of neoliberalism, with the ‘altos índices de desamor’ (high rates of heartbreak), as if you could measure discontent.

If you don’t already know the story of Chilean neoliberalism and the subsequent uprising, Amantes de cartón tells it at the micro-level, through the relationship of two lovers in the middle of an uneasy calm before the storm. The backdrop for our protagonists is ‘Un país de cartón’ (A cardboard country) – and through the repeated motif of cardboard, a precarious, fragile, shaky world is painted. We start with the country and we end with those who populate it, as if there was a cardboard infection racing across the nation. The great deception of the poem comes when we hope to be in one place:

where cement abounds,
places where, if you scratch with a coin,
you find they are made of cardboard.

Love and faith become cardboard too, and in the end, we are all condemned to be cardboard – if these powerful forces can’t save us, then we are truly lost.

After this verdict is handed out, the poetic voice looks for someone to blame – we run through a series of cultural icons only to end up blaming ourselves, expressed in a key chilenismo: ‘somos todos un poco hueones’ (we are all kind of hueones [jerks]). We want to blame the system, but we all form a part of it – we can’t escape responsibility. And nor can the poet escape his role in the process of heartbreak:

It’s hard to love in this city,
we found that out in a fight
in a bar that no longer exists

The city changes and so do the relationships in this city, that makes love so difficult to the extent that it destroys it.

‘Acción poética’ (Poetic action) traces the love story with personal touches that transport the reader to Santiago. We walk with the poet and his lover while their love reaches the point of exhaustion, for ‘habíamos visto ya todas las películas / habíamos oído ya todas las canciones’ (we had already seen all the movies / we had already heard all the songs). They make fun of the walls but their humour is cold, for lack of other things to talk about, these ‘pequeños miserables perdidos’ (miserable little lost souls). They want to distance themselves from others in ‘Nuestra truculencia’ (Our truculence). They avoid any ‘símbolo del sexo capitalista’ (symbol of capitalist sex), another moment where the political ideology of our protagonists is made clear – but it’s an ideology that doesn’t save them. ‘Nuestra truculencia era la pureza del amor de dos seres sufridos’ (our truculence was the pure love of two suffering beings), but it’s a truculence or quarrelsomeness made out to be pleasure, perhaps to replace pleasure. It’s the beginning of the end.

In ‘Nos faltaban manos’ (We had no hands) we see the recurring theme of cardboard once more. The lovers lose their humanity when they lose their hands, the hands cut off ‘con un cuchillo cartonero’ (with a cardboard knife). If we take cardboard to be what Santiago is made of, and also what capitalism is made of – an artificial material, man-made – cardboard, although it seems fragile, has a destructive power. The leitmotiv of carton brings back memories of the more explicitly political poems, and we see this in ‘La preocupación por el futuro’ (Fear for the future). When Ortega wrote the collection, he did not know Santiago’s future, the future of the social uprising nor the pandemic – but the future appears as a ghost and provokes a fear that accelerates the process of falling out of love:

We put our heads to it and blew up love,
will it have been love?

Romantic traditions die and so do the lovers; ‘la preocupación por el futuro nos mató pero fue una muerte lenta’ (fear for the future killed us but it was a slow death).

‘Amantes de cartón’ (Cardboard lovers), the titular poem, underscores the role of the city in the lovers’ heartbreak, because ‘Santiago no los ayuda’ (Santiago does not help them). It’s like falling in love in an apocalyptic moment – if everything is dying, how does love survive? The image of a cardboard lover ends the series that begins in ‘Un país de cartón’ (A cardboard country). We go from the macro to the micro, a cardboard country that contaminates its people to the point of transforming us into this fragile, corruptible substance. The last poem too brings the theme of cardboard:

We were made of cardboard, my love,
but corrugated cardboard;
our love was no use
not even to make a box.

In this cardboard, capitalist world, cardboard transforms everything. Love does not survive for it has no use under capitalism, it only sees itself transformed into something useless and unrecognisable.

And with that, the collection comes to an end. We still do not know what will become of Santiago’s future, nor the possibility of love in Santiago de Chile, a corrupt cardboard city. What Ortega does well is to help us understand the relationship between political life, as seen on the news, and love, which is expressed through poetry, by bringing the two together in one collection. We are able to understand that politics is not impersonal, not a force that affects us from time to time – but instead a power that is omnipresent, that affects all of us in our personal lives. We do not know ‘que será de este cabro’ (what will be of this cabro [bastard]), but there remains the hope that understanding the past will help us navigate our uncertain future.